Is there really anything interesting about Pollen? 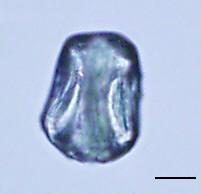 One of the pollen types I’m studying

Well, in a word, Yes. I’ll skip the details and put it simply, pollen is the sperm of the plant kingdom. It can be carried a long way by all sorts of means and every species is unique, you’re probably breathing some in as you read this too. Still unconvinced?

I’m pretty keen on pollen, and it’s surprising that so little is known about something that is all around us every day. Last year I got the chance to begin a research project on pollen (lucky me?). I thought it was a great opportunity, and as I started to read as much as I could I began to understand just how important it is. So if you were brave enough to click on an article about ‘pollen’, then persevere and hopefully I can get you interested too!

We all know a little about the high-profile animals; Pandas, Tigers, Polar bears and the like. You’ve probably heard that as fewer and fewer are left, they are in real danger of dying out. One of the big problems is inbreeding, causing a loss of variation and less healthy animals, then one day perhaps disease, loss of habitat or hunting, and that will be the end of that story. Of course, this happens naturally, but scientists have found that in the last few decades, humans have accelerated the rate of extinction by as much as 1000x.

So lets take a moment to spare a thought for plants, often overlooked, even though we walk past them every day. Animals can search for a mate, they can and do travel great distances. Plants on the other hand, they are stuck for their whole lives right where they started (with a couple of exceptions). Ideally, if you are at home in a big forest, it’s not a problem. But as we lay roads, clear the land for grazing and plant great open fields, sometimes a few trees, for example, can get left on their own. Ecologists often call it habitat fragmentation, and believe it or not it’s one of the biggest drivers of biodiversity loss facing the planet today (yes, worse than climate change at the moment).

So, where am I going with this? Well plants use pollen to reproduce over great distances, miles probably, but the problem is, we don’t actually know how far. Scientists have investigated it in some important plants like corn and maize, but the great forests that dominate so many landscapes have been largely ignored. Considering how badly forests have been fragmented, and how much humans rely on them, it seems fairly intuitive that we should find out just how far that pollen can travel, to allow them to reproduce and stay healthy. Congratulations if you’re still with me.

That, in essence, is what I’m trying to do – find out how far pollen can travel. I certainly won’t have all the answers, in fact, I’ve barely scratched the surface but I think it’s pretty interesting nonetheless. I’ve been using pollen from great big Cedars on the campus where I study, and also using grass pollen as a comparison (sometimes sneezing a bit too). Eventually I hope that the research can be used to design nature reserves, or prioritize areas for conservation, but that is a long way off. So next time you go walking past a tree, spare a thought for its pollen, and just how far it might have to go to get the job done.

Fellow of the Royal Society,
Go to Top