About: James is a young biologist recently graduated from the University of Exeter. His first experience of expeditions was a month spent in the rainforests of Madagascar at the age of 17. Subsequently he has been involved with several further expeditions to Norway and the Peruvian Amazon, conducting research in South Africa, and sailing the Atlantic. Most recently James has returned from an expedition to the Empty Quarter and Dhofar Mountains of Oman having successfully lead research into the critically endangered Arabian Leopard. James’s main research interests are the effects of habitat fragmentation on the conservation of rare species. James is also a keen advocate of youth development through scientific expeditions, having spoken in schools across the South in support of the British Schools Exploring Society. 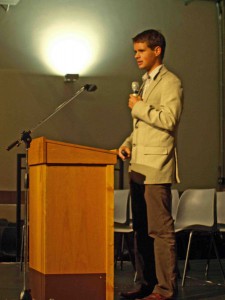 James can also tailor a presentation to your requirements, incorporating aspects of team development and motivational speaking based on his experiences leading teams in challenging environments.

Fee: £75 (plus travel). Presentations on the topic of BSES are offered free.

Distance prepared to travel: Throughout England, Scotland and Wales.

Enquiries: For more information or to arrange a talk email Contact@jamesborrell.co.uk

Fellow of the Royal Society,
Go to Top