A post-post-truth world: Evidence and conservation in 2017

We all want to make conservation decisions that are likely to be successful, but where to start? What works for one location, might not work for another. What worked for one group of species might be completely unsuitable for the next. Conservation is complicated and often counter-intuitive, so instead of jumping to conclusions we need to draw on hard evidence.

That is exactly what the folks at Conservation Evidence do – and to celebrate the launch of their free book, here’s a guest post from Claire Wordley.

What Works in Conservation

Make this year better for conservation – download yourself a free copy of ‘What Works in Conservation 2017’, check out the evidence before taking conservation decisions, and stand up for science, truth and expertise. If we want to live in a world where evidence matters, we need to start using it. Fast.

To say that 2016 was a pretty terrible year for experts and evidence has become a cliché for many. There were some incredible bright spots that got overlooked by many in the melee, but the choice of ‘post-truth’ as the Oxford Dictionaries Word of the Year exacerbated the sense of despair felt by many scientists and critical thinkers over the past 12 months. For some, it felt that creative lies, charisma and the cynical exploitation of fear won every time against boring, plodding old truth and evidence. Who needs the evidence that a certain policy may make things a bit better if certain conditions are met when you can do better with grandiose, unsubstantiated claims?

But the (admittedly spectacular) success of a few post-truth individuals does not mean that evidence is held as irrelevant everywhere, or that it cannot still become the bedrock of decision-making at every level. We need to teach better critical thinking skills; hold the powerful to account through rigorous fact-checking; and keep emphasising the importance of evidence in every arena. Believe it or not, the latter has been increasingly happening in many disciplines over the last few years, with talk of an ‘evidence revolution’ afoot that will see less partisan policy-making and more evidence-based decision making. ‘What Works’ centres have been set up by governments in many countries to gather evidence on the effects of different interventions in everything from public health to education – and have had some notable successes.

In conservation, the use of evidence in decision making is gaining traction, thanks in part to the work of Professor Bill Sutherland and his team at the Conservation Evidence project. Conservation Evidence has the wildly ambitious but conceptually blindingly obvious aim of collecting together all the evidence for how well every conservation intervention ever dreamt up actually works, for every species and habitat in the world, and making it freely available on their website (www.conservationevidence.com). The project is ongoing, but topics covered so far include bees, birds, bats, amphibians, forests, sustainable aquaculture, soil fertility, natural pest control, freshwater invasives, and farmland conservation in Europe.

This week sees the launch of the updated ‘What Works in Conservation’ from the Conservation Evidence project, a book which combines the project’s revolutionary methods of evidence gathering and reviewing with the practical concerns of on-the-ground conservationists. Essentially a physical summary of what is available online, the book (which is updated approximately annually to reflect the new topics covered) provides a handy reference manual and a physical reminder to check the evidence before you act – and should sit on the desk of every conservationist from reserves managers to policy lobbyists. With every conservation intervention scored for effectiveness, certainty and possible harmful side effects by a panel of experts (who are still welcomed in some quarters, despite claims to the contrary), then assigned to a colour coded usefulness category, this book provides a quick and easy way to ‘fact-check’ before making decisions.

Not all conservation is currently underpinned by rigorous evidence. There are plenty of examples of seemingly good ideas that failed to work on the ground, but yet become the accepted approach (look up ‘bat bridges’ for a start – I could rant about those all day). So if you are interested in what really works in conservation, and what is just hot air and wishful thinking, check out ‘What Works in Conservation 2017’ or www.conservationevidence.com. Daily evidence viewing will move us cleanly and effortlessly into a post-post-truth world*.

* Claim unsubstantiated by any evidence, but it might just make a few conservation decisions a hell of a lot more effective. 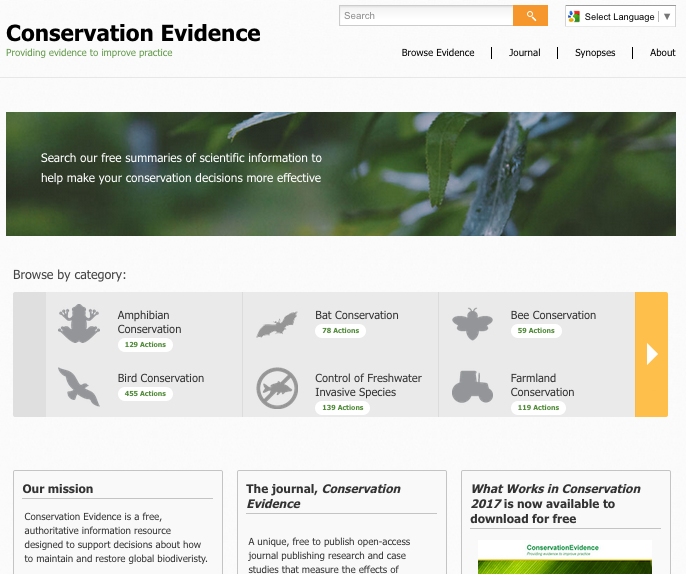 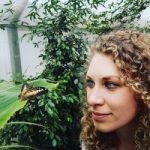 Claire Wordley is a postdoc at Conservation Evidence (see, you should always check the vested interests of opinion piece writers), and is passionate about getting evidence used more widely in conservation. After spending time stroking apostlebirds in Australia and chasing bats in the Western Ghats in the name of research, she felt frustrated about the lack of ways for scientists to leverage their findings into real-world changes. She now works to get conservationists, industry and government to check out the science on Conservation Evidence before they act.

If you want to receive updates on the Conservation Evidence project, email her on cfw41@cam.ac.uk.