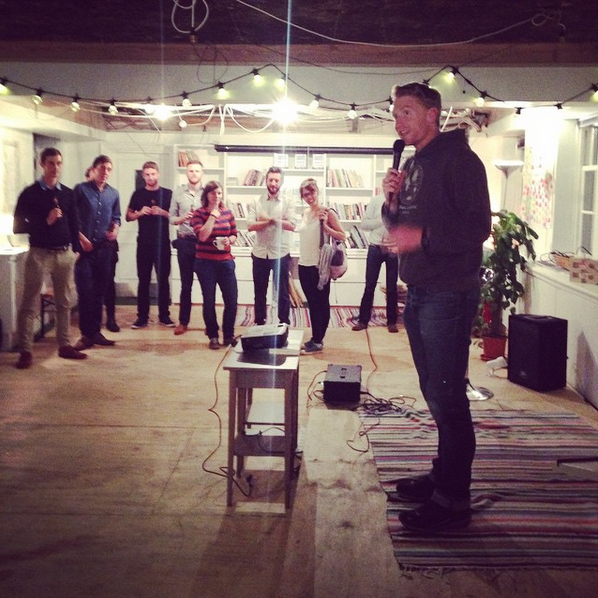 Yet Another Example Of How Adventure And Citizen Science Are Compatible

I spent last night at the #AdventureGathering. The format pretty much converges for lots of these events – you find a reason to get lots of people who have done, or a thinking of doing some fairly daft things, in the same room – and then you see what happens!

In the space of a couple of hours, I managed to meet a chap who had rafted the amazon, a lady who helps to organise the Olympics in Brazil, another with a passion for dynamite fishing (not actually doing it, just the issue!), a bunch of SUPers, a chap who hitchhiked a rather long way, and a couple who are running and cycling similar distances too.

Phew, when stepping out into the cold London night, it’s events like this that serve to remind you to keep trying to do, whatever it is you want to do.

One thing that makes me particularly happy though, is how many of the adventures and challenges were seeking to be more. From citizen science to raising money for charity, or even just showing other folks (especially girls) that ordinary people can do extraordinary things.

Popping up in my inbox the morning after, a few people have sent me this link, about a crazy Welsh adventurer. I’m particularly excited, because as well as being a daft, tough, sweaty, challenging and long adventure – he’s taken every opportunity to get The Guardian to publish information about the critically endangered species that he’ll see on the way.

Here’s a passage after my own heart…

During his five-month excursion, Dykes expects to see lots of wildlife, including lemurs, chameleons, scorpions, frogs, butterflies and crocodiles (“not too close though!” he noted).

But what he hopes most to see is the incredibly-elusive, almost-mythic northern sportive lemur. “[It is] the rarest of the lemur species, with only around 50 left – which is a huge shame!” he said. “If I do spot it, then I’ll take note of my coordinates and inform the conservationists of my location and time of sighting. I’m hoping it’s in an area that it hasn’t yet been sighted.”

Yes! That ticks all the boxes for me. Good luck to you Ash Dykes, and I hope the spirit of your project is an example to anyone dreaming of a big adventure.

For any Madagascar fans out there, you might want to check out the Lemur Conservation Network. I’m also leading an expedition to Northern Madagascar that leaves in just two months, more about that here.